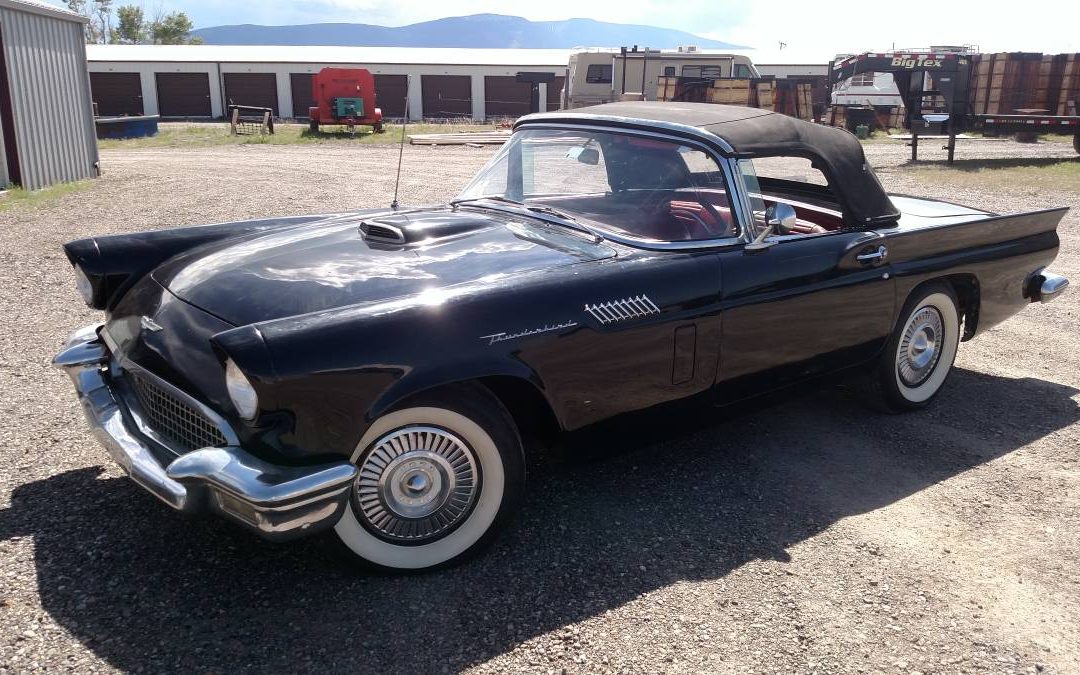 I even started a file to help push me along the path of acquiring one of these timeless beauties. That file is dated 1998 (it’s now July, 2018)! In 20 years of career, kids, family and all the other great parts of modern life, I had set aside the dream of a Thunderbird for me. Now, I figured, it’s my turn.

Excuses Not To Buy A Thunderbird

Fast forward to 2018. With both of my kids out of the house (my daughter is just about done with a PhD from Clemson and my son is a semester away from an electrical engineering degree from University of Texas, Dallas), it was time. I’m not getting any younger, and they’re not getting any cheaper to buy. And, a book I was reading ( “The One Thing” by Gary Keller), I came across a mention of a study that stated most people regret the things they DIDN’T do. That struck a cord with me, as I had been putting off the dream ‘Bird for years due to a variety of reasons (whining excuses);

Realizing that procrastination was getting me nowhere, and my excuses for not making a leap were insane, I started looking for a 1955, a 1956 or a 1957 Thunderbird about 6 months ago. Truth be told, I might have been happy with a 1960 “Squarebird.” But, I figured as of recent, I would probably have to invest the same amount of time and energy restoring a lesser T-bird (if there is such an animal), so might as well shoot for the stars and get EXACTLY what I wanted.

I had some basic requirements, but year and condition were definitely fungible.

So, I started scouring craigslist.org and several of the online vintage car magazines. I set a budget purchase price, but realized that I might have go a little above that if I found one that I liked. I started looking in earnest in the Fall of 2017.

I did see a few over the months. Mostly some pretty scraggly examples that were missing at least one of my required pieces of equipment. Most were wildly (IMHO) overpriced. One was a 20 year-old barn find 1955 that needed a lot of work to be road-ready, and still priced at the top of my budget. Most were in Denver or thereabouts. So I just passed them by.

One in particular caught my attention in May of 2018 – a red 1955 Thunderbird located in Casper, Wyoming. Casper is about 5 hours North of Colorado Springs, and I figured it would be a full day of driving to see it. I whined a little at that as well – 10 hours of driving time just to see a car! Waaa! It sounded great – rebuilt engine, good body & new interior. One problem – price was  way out of my price range. But, I figured I should check it out. I contacted the owner, a retired couple, and we discussed the car. It sounded pretty nice.

Eventually, it was May – time for vacation! But, right before we left for 3 days at The Henry Ford Museum and a week at a Lake Cottage in Michigan, I saw a black 1957 Thunderbird that was located in Livingston, Montana. About 11 hours from Colorado Springs, it was at the tippy-top of my price range. Bot, it was a 1957 Tbird (the EXACT year I dreamed about) and ticked all the boxes for equipment & condition – both roofs, fender skirts, PS, PB and automatic, plus it was a D code car – meaning it had (originally) a 312 cu. in. engine with 245 hp! And, even though the owner said it had been in storage for over 5 years, it looked complete and relatively un-molested.

This was definitely a contender, but had 2 big strikes.

Next: The trip to Montana, the purchase and the trip home in my next post!

I wanted to include a link to a great blog by Chris at riseofthethunderbird.wordpress.com. He really inspired me to purchase my Thunderbird, and with his many detailed how-to posts, has made me want to document my fixes and restoration on my glamorous “Bird as well. This is a MUST read for anyone owning or restoring any old car or truck, as it shows how dedication and hard work can overcome just about anything. Thanks Chris!

Here’s me and my neighbor unloading the Thunderbird!